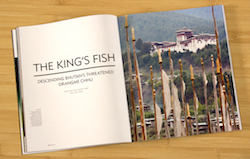 “A cinematic adventure into the heart of wilderness, Power of the River captures the connection between people and the rivers that are our lifeblood.”
– Robert Redford

“A poignant piece of culture and an unflinching look at the hardships that come with an expedition into the unknown.”
– Audrey Dwyer, Steamboat Pilot & Today 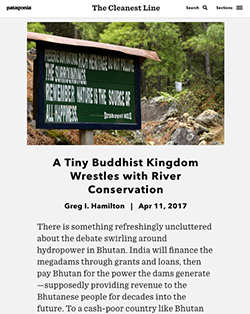 “A Tiny Buddhist Kingdom Wrestles with River Conservation” by writer/director Greg I. Hamilton in The Patagonia Blog, The Cleanest Line

“Fishing Rivers in Bhutan for the First Time (and maybe the last).”
– Outside Magazine

What audiences are saying (unsolicited feedback):

“Experiencing the subtle joys of the river through your film was powerful and thought-provoking” – Hyon Rah (a conservationist working on clean water and energy needs in Assam, India— downstream of Bhutan on the same river we floated)

“A masterful piece of storytelling … You covered a lot of ground and bring attention to a big issue in this part of the world. It’s a complex topic and I left thinking about the trade-offs … the film left me reflective about my own work on climate issues and how to continue doing better.” – Jerry Seager (chief program officer at VCS, the world’s leading voluntary carbon market program) 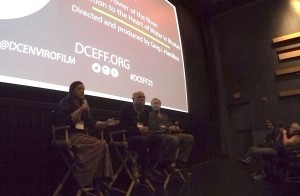 “I attend 10+ screenings at the Environmental Film Festival annually. Often the theater empties out after the screening. For yours, few people left: they wanted to learn more.” – Steve Kaffen (auditor, National Endowment for the Arts)

“Amazing! Loved it. Moving film with beautiful scenery. What appears to be a ‘standard’ Greg Hamilton film— movies with a message that bring awareness to issues in an entertaining and cinematographic way. Amazing views, cool rapids— would be a shame if they dam it.” – Kathy Sugnet (hydraulic engineer at the Federal Highway Administration)

“A tiny Buddhist kingdom has the world’s ear when it comes to conservation.”
– Eugene Buchanan, Steamboat Pilot & Today

“Is Bhutan the Shangri-la it is rumored to be? Can a policy of Gross National Happiness co-exist in a country moving toward modernization?”
– Laurie Sammis, Sun Valley Magazine

“The film takes a humanistic approach as it follows a local named ‘Good Karma’ down one of the last un-dammed rivers in Bhutan. Although the Buddhist country on the edge of the Himalayas is famous for preserving its wild spaces, it has jumped on board with hydroelectric power in recent years, damming most of its rivers.”
– krēˈāt magazine, Breck Create

“A world record was actually set while we were there, the protege of one of our characters caught a 54 pound golden mahseer on a flyrod in Northern India.”
– Filmmaker Greg I. Hamilton interviewed by Radio CMC‘s Maureen Stepp

“[Power of the River’s director] Greg illustrates the drive, desire, and passion of the independent filmmaker that we here at the BFF strive to highlight.” – Breckenridge Film Festival’s inaugural Filmmaker of the Month