With kind support from Himalayan Rivers United, Bhutan Ecological Society, and The Bhutan Foundation, we are proud to bring Power of the River back to Bhutan. This premiere screening will reach policymakers and citizens in the Kingdom’s capital city of Thimphu. 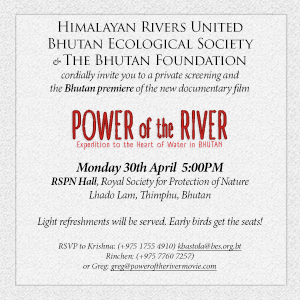 Featuring an appearance and special presentation to Dasho Paljor J. Dorji “Benji” who appears in the film.

Followed by an expert panel hosted by Tshewang Wangchuck (Executive Director of the Bhutan Foundation). Panelists:

Event recap: with invitees from Bhutan’s government, international organizations, philanthropic groups, tourism industry representatives, and more, we were pleased to have most seats filled in our Bhutan premiere of the film. After the film, Dasho Benji addressed the crowd and received a special presentation from the film’s cast and crew. Then Tshewang Wangchuk facilitated a panel discussion lasting 30 minutes. The Bhutan Foundation reports:

“Guests actively took part in the question and answer session after the screening. There were a number of intriguing topics discussed all revolving around sustainable hydropower, climate change and conserving Bhutan’s environment for our future generations. It was certainly a fruitful discussion!”