Join the excitement as Power of the River builds on 7 festival selections, 4 award nominations, and 1 “best feature” award to date!

Power of the River is early in its release on the film festival circuit, but we managed to win “Best Feature Film” for Colorado filmmakers at our very first screening! 2017 will feature premieres at the largest and longest-running environmental film festival in the U.S. as well as one of our most respected wildlife film festivals. Greg’s last film was selected for 21 festivals total, so there are likely to be numerous additional opportunities to tie in with our presence at festivals worldwide.

With investment levels starting at $2,000 per festival, partners can benefit from our connection with audiences … plus receive meaningful impressions to fans of each fest and members of its local community. Each event has its own opportunities and limitations for sponsorship, but one thing you can count on is the Power of the River team’s ability to deliver exciting events and community outreach in every location. Here is just one real-world example of an exciting event we conceived and executed at one festival: 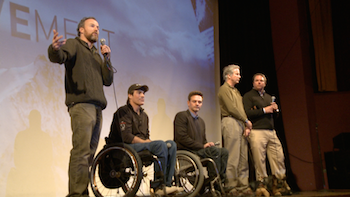 Partner opportunities vary with each festival but may include:

When it comes to event activation, we think big; our partners can benefit from our team’s many decades of rallying audiences around exciting film events like the annual Warren Miller ski film tour— Power of the River‘s producers have over 60 years combined experience! Contact Greg for more details.

“Thanks so much for all your amazing promotional efforts, Greg! Clearly they’re paying off! We are indeed sold out.” – Molly Berg, Programming Manager, DCEFF

“Greg illustrates the drive, desire and passion of the independent filmmaker that we here at the BFF strive to highlight. He undoubtedly left an impression on countless festival attendees, fellow filmmakers and Breckenridge locals” – Ashley Zimmerman, Program Coordinator, Breckenridge Film Festival