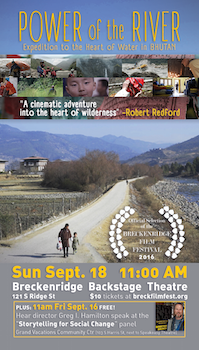 Power of the River screened Sunday, September 18th, a morning show at 11:00 AM at the newly remodeled Breckenridge Backstage Theatre (121 S. Ridge Street). MEET THE FILMMAKER! Director Greg I. Hamilton spoke after the show.

PLUS: Director Greg I. Hamilton spoke as part of the FREE “Storytelling for Social Change” forum 11:00 AM Friday, Sept. 16 at the Grand Vacations Community Center (103 S. Harris St., next to the Speakeasy Theatre). 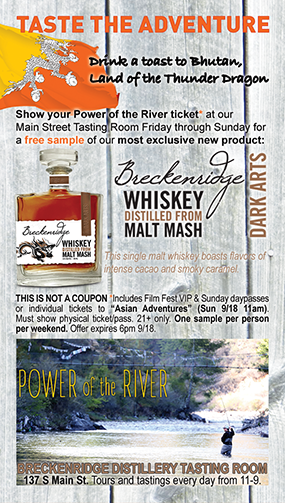 CATCH THE SPECIAL POWER OF THE RIVER PROMOTION at Breckenridge Distillery’s Main Street Tasting Room (137 S. Main) during the festival! Prizes, sneak preview clips from the film, and–for all of our movie’s ticket holders–a FREE SAMPLE of the distillery’s most exclusive new single malt whiskey.

The Distillery is donating a portion of this weekend’s bottle sales to Power of the River! We need your help (and theirs) to finish the last few details on the film and share it with the world. Please support our efforts today: